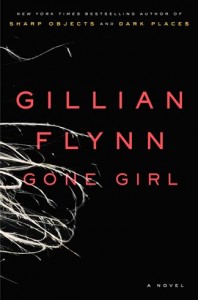 I’ve been reading a lot of “best of 2012” book lists so far this month, and sadly, I don’t believe I’ve read a single book on these lists. I don’t seem to see movies when they’re still in theaters, and similarly, I guess I turn back to my want-to-read lists, rather than the Just Released tables, when I’m picking up new books. The only 2012 book I’ve read is Gone Girl by Gillian Flynn.

It’s kind of late in the year to be sharing my review on the book, as it seems so many people have been buying and reading it, according to the top sellers lists. And to be honest, I’m probably going to say a couple of things here that will sound so super snobby that you’ll be apt to dislike me right off the bat, but I’ll share it all anyway.

Snob alert: I don’t often read the books that are bestsellers. I am not sure that’s necessarily a conscious effort, it’s just that my head tends to be in other things … or the things that interest my particular head don’t interest others in a way that connects to bestsellers. Gone Girl is the perfect example of a book that does make that connection.

I like the creepy, I like psychological studies, I like a mystery, I like the sudden twist that takes everything off the rails. Gone Girl has all of this. It has the bonus of having two first-person narrators so you get into two different heads, see the psychological workings of two people. As in many stories, the main event has already happened, and from one voice we are getting the story of what leads up to that event, and from the other we’re seeing the aftermath, people trying to unravel exactly what happened.

I had a bit of a hard time getting into the story at first, and I’m not sure if it’s because the Gone Girl herself and I share a first name … and who wants to be reminded that something bad happened to [insert your name here]? Or if it’s because I was simultaneously reading and much deeper into Summer of Night, by Dan Simmons—a completely different atmosphere and characters who were historically a time apart and so utterly naïve, despite the terrors they were experiencing as children.

Enough about me: will you like the story? Do you “hate all men”? Do you “hate” the way women act?  Have you had to work at your marriage? Are you fed up with being a “cool girl” or you’re just tired of seeing friends fake being “cool girls”? How do you feel about TV personalities like Nancy Grace and television news coverage of missing wives and the scrutiny their husbands undergo?

It doesn’t really matter if you answer yes or no, love ‘em or hate ‘em to those questions. Those feelings, in yourself or what you see in others, will come in to play in this story. You’ll find something to identify with no matter how crazy things seem. And if you like a good mystery, all the better.

Like any good story, and as in Flynn’s earlier books, you know that what seems to be the obvious answer probably isn’t the answer at all. It’s not that easy. But (snob alert) in Flynn’s earlier books, Dark Places and Sharp Objects, I figured out what was going on in pretty short order, and it did slightly dampen my overall enjoyment of the read. In my opinion, there was a pretty sharp tell in Sharp Objects.

Don’t get me wrong, I l-o-v-e Flynn as a writer (I even marked the release date on my calendar and bought Gone Girl the first day it was out, while on vacation, even if I didn’t read it for a couple of months). I was sure I’d figured out the twist in Gone Girl … but I was so very, very wrong. And the kicker is, what was really going on was so much more gratifying that what I imagined.

I’m not going to go into any spoilers, but as a person who likes creepy and psychological, this book has it in spades. I am so happy to see Flynn in a bestseller position, and to see other folks I admire give her honors as well (see Brad Meltzer’s tweet in September: https://twitter.com/bradmeltzer Dear GONE GIRL, Thanks for living up to the hype. ‪#blownaway). Having read her third effort, I’d say she is a writer coming into her own, refining her craft, and taking us on one of the most unnerving journeys you can imagine. I hope she continues, because I’m ready for the next freaky adventure.

Amy says, "Wait a minute, I want to finish this chapter."