I finished such a lovely book this morning: Nightwoods, by Charles Frazier. Not lovely as in lighthearted or sweet, but just so beautifully written. Charles Frazier is probably better known for Cold Mountain, which I’ve not read, and seeing the movie doesn’t count (but Jack White’s in it, so… swoon!). 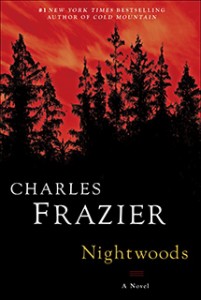 Nightwoods is a tragic story in many ways. Luce, a loner woman living off the beaten path in the depths of small-town North Carolina, caretaker for a no-longer-used travel lodge, inherits the uncomfortable task of raising her murdered sister’s two strange little children. Bonded as twins, they inhabit their own secure realm, not allowing anyone to get even a smidge in to their world. Not letting their defenses down for a look, an acknowledgment, let alone a word. Silent and pyromaniacal, they are not to be trusted or left alone, even as they require someone to shepherd and protect them in their young world.

And Luce is scarred from her own past, her own weird childhood and unlucky adult years. And as she struggles to find the means to become “mother” to these two distant children, she also finds herself having to break down her own walls when an unlikely suitor, a nostalgic man from her teenage years, arrives and impresses himself into her life.

But before they can settle into life as a jigsaw family, they must deal with Luce’s sister’s murderer—her ex-husband, Bud. Bud had come into a large sum of money, a life-changing amount of money. But before he killed Luce’s sister, Lily, he’d discovered that she’d hidden the money so they could have a good life with it. After her death, Bud becomes certain that the money is with the kids, and he set off to find them.

A man without morals, Bud infiltrates the town until he finally makes contact with Luce, and then everyone’s worlds become entangled.

This is a book that I wish I had a paper copy of, rather than the audio book. What I found so beautiful in it was the descriptions of nature—descriptions of water tumbling over creek stones, of Indian peace pipes growing from the earth, of ice forming in a pony’s mane—and I can’t go back and find them, recreate them. Set in the past of decades ago, there is something so crisp, so tied to nature about the environment of this book. Despite the misdoings of humans in the midst of it.

Amy says, "Wait a minute, I want to finish this chapter."